Last month, the Sickle Cell Disease Association of America (SCDAA) held its 45th National Convention on October 25-28. The three-day convention brought together sickle cell disease (SCD) patients and their families, community based organizations, researchers, clinicians, and other stakeholders. This year, the convention launched a new format to provide new learning opportunities with several different tracks, and a speed networking breakfast that allowed for increased interaction amongst attendees. The convention included three keynote speakers: Dr. Patrick Hines, who discussed innovations in blood function diagnostics; Dr. Clinton Joiner, who focused on red blood cell membrane as a target for new SCD therapies; and lastly, Dr. Alexis Thompson addressed how gene therapy could be a potential cure for SCD. New this year, was a Hollywood Squares game, which showcased patients and their stories and encouraged audience participation. This year’s convention had record breaking attendance and generated a lot of discussion on Twitter under the hashtag #SCDVictories. Make sure to visit sicklecelldisease.org to stay abreast of upcoming SCDAA events.

On November 8, the American Society of Hematology highlighted sickle cell disease at the Coalition for Health Funding’s (CHF)’s 2nd Annual Public Health Fair on Capitol Hill. The purpose of the CHF health fair is to educate congressional members and their staff about important health issues. ASH educated attendees on what SCD is and why we need to do more to decrease the burden of the disease. Dr. Deepika Darbari, a pediatric hematologist at Children’s National Medical Center who specializes in SCD, and an ASH member, provided an overview of SCD and demonstrated the process of sickling versus non-sickling red blood cells.

The Sickle Cell Disease Association of America (SCDAA) announced Pennsylvania native Kiarra Roseburgh as SCDAA’s National Child Ambassador. The winning contestant, Kiarra Roseburgh, is a talented and active eight-year-old third grader who was born with type SC SCD. “Kiarra’s dream is to inspire others in the SCD journey and to increase the support of this disease,” says SCDAA President Sonja Banks. “She has amazing energy and a strong commitment to this cause, and we commend her for all that she has already accomplished. We are so very proud to have Kiarra as our National Child Ambassador, and we look forward to future projects with her.” Click here to find out more about Kiarra. 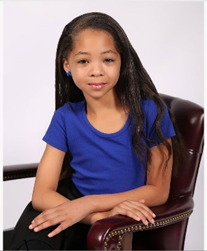 Cheedy Jaja, PhD, who represents the International Association of Sickle Cell Disease Nurses and Physician Assistants (IASCNAPA) on the Sickle Cell Disease Coalition, and associate professor at the University of Cincinnati College of Nursing, has launched a clinic in Sierra Leone for people living with SCD. In 2015, The Sickle Cell Cares Network, a patient advocacy group, approached Dr. Jaja in the hopes that he could help provide care and medication to a group of 2,000 people in Sierra Leone who show signs of SCD. With support from the IASCNAPA, Dr. Jaja hired a clinical team consisting of a physician’s assistant, registered nurse, and public health worker and was able to determine who needed care by utilizing a point of care device known as Sickle SCAN that determines if a patient has SCD. Dr. Jaja hopes that eventually this clinic will serve as a resource to the Sierra Leonean government about how best to care for SCD patients. Click here to learn more about this exciting initiative.

In the October edition of ASH Clinical News, the American Society of Hematology’s monthly clinical magazine, the regulation of opioids as a direct result of the opioid epidemic in the United States is a featured story. The article includes interviews from several health care professionals, including Dr. Patricia Kavanaugh, co-chair of the Emergency Department Sickle Cell Collaborative, a member of the Sickle Cell Disease Coalition. “If you have cancer or sickle cell pain, there are few options proven effective to alleviate the pain. These broad-stroke guidelines have left a challenge for those of us in the oncology and sickle cell world to advocate for our patients.” Click here to read more about the challenges of prescribing opioids to those who need it most, including those living with sickle cell disease.

The American Society of Hematology’s (ASH) 59th Annual Meeting and Exposition will take place December 9-12, 2017 in Atlanta, Georgia. The meeting will provide an invaluable educational experience and the opportunity to review thousands of scientific abstracts highlighting updates in the hottest topics in hematology.  This year’s meeting will include sickle cell disease in a number of its scientific and educational sessions including:

More information about the schedule and program is available here. Also, if you missed the ASH Consultative Hematology Course in September, which highlighted nonmalignant hematology, you are in luck. A second course will take place on Monday December 11th at the Annual Meeting, with one session focusing on Sickle Cell Disease in Adults: What does the consultant hematologist need to know? Registration for this meeting is now open.  A special edition of the SCDC Update will be distributed in late November to highlight the SCD programs at the ASH Annual Meeting.

The status quo is unacceptable & we are setting out to change it. Join us to #ConquerSCD! www.scdcoalition.org

Thank you for signing up for email updates.